Jonathan Leong (b. 1983) created his Internet avatar ‘ZXEROKOOL” after failing to register his own name for a free email address. What began initially as an digital persona and self styled practice of ‘Visual KungFu”, morphed into a fulltime art adventure with notable art commissions including the trophy design work for the 2008 MTV Asia Awards and a multi-media visual art opening for Kobe Bryant’s Nike sponsored Indoor Stadium Appearance in Singapore, alongside projects for brands such as New Balance and Tiger Beer. Born in the 80s but raised at the intersection of where the Internet and digital culture began to emerge, Jonathan’s work represents a new wave of artists who are reframing the boundaries of contemporary artistic expression. Raised in the golden era of Saturday morning cartoons, second hand comics and fantasy bookstores, his work often deals with the exploration of modern mythology, mankind’s relationship with the ever-evolving technological construct, and a satirical approach to pop culture. In 2011 Jonathan’s art practice expanded to Shanghai with representation by ART LABOR gallery.

Your source of inspiration…

Since my primary+secondary school days in the 90s I was into anything at the intersection of visual nerd culture.
After growing up with an itchy eczema condition in my early years, I was a prominent member of the “Indoor Sports Clubs”, namely heavy online gaming, Internet forums, comics books, and copious amounts of movies. Movies are one of my biggest joys, I don’t have film snobbery, I enjoy most movies and find merit in all forms of creativity. Every-time critics pan a movie, I feel an even bigger need to watch it, no two individual opinions on films are ever 100% similar, like the Johnny Depp movie Transcendence that was bludgeoned in the movie trade press when it was released, it was such an under-rated gem.

In space scarce Singapore at one point I was really raging in my mind as I had all these ideas that I wanted to execute, stuff like Dioramas, sculptures and such but no space to do them, then one day I had an epiphany and said screw it I’ll max out my art making with whatever tools I have on hand…which is digital imaging technology such as Photoshop (which I’ve been using for fun since 2001), consumer off the shelf stuff you can buy at any computer mall – to make art.  I like to take the tools of mass production (photoshop was primarily created to advance the media industry’s desktop publishing practices and to streamline processes amongst companies, photographer and printers, etc) and use them for bespoke creativity that I can call my own. A great quote goes like this “it’s not the tool, it’s the person behind the tool that defines the work”. I decided that my studio will be wherever I can bring my computer.

Slaying werewolves with Kate Beckinsale in the wee hours of the morning, lunch with Andy Warhol, hanging out with Emily Ratajakowski for tea and kicking ass alongside Batman in Arkham Asylum come nightfall. Followed by meditation with Richard Branson in Space. I know it’s gonna be hard to organise that, but like the saying goes aim high and maybe you might land somewhere along the clouds…

Sneakers, totally addicted, not as hardcore as some people, but for the limited space I have… pretty bad. It’s all piles of my art test prints, some discarded sculpture, LEGO (considered a need not an indulgence) and boxes of sneakers. I just started collecting artist custom movie posters…sometimes I spend entire weekends on ebay looking through stuff, I was prepared to shell out $700+USD for a print when somebody beat me with $800++USD…oh well can’t win all the time I guess. But it taught me one thing, with stuff you love either go big or go home…I still managed to snag a custom art print of the recent Guardians of the Galaxy movie for $350 USD, slightly below competitive bidding rates now…it’s now my prized possession…gonna get it framed soon…

Your biggest challenge
Finding enough time to execute all my ideas, everyday I wake up with new motivations and thoughts on things I’d like to make. I think good ideas are not the problem for optimistic creatives, time is…

I wish…
To have the space to execute an epically large art diorama / installation / sculpture, etc… the things I would make (and be able to store) in such a large space…

What colour best represents you, and why?
Neon Green. If it was ok for Luke Skywalker and Yoda, it’s ok for me.

Happiness is…
Having the ability to buy artwork from other artists whose work I enjoy.

There is a strong sense of humour in your work- what are your key influencers and how do you decide on a particular series of work? Take us through your creative process.

Having grown up at the point just before the Internet explosion in the late 80s and 90s to what it is today, I’m equally influenced by analog and digital culture.
The truly globalised media and the Internet have only been around for a fraction of human existence,  previously because of limitations in communication or geography culture tended to exist in silos, however we’re experiencing an ongoing integrated experiment into how these advances in communication are shaping perception, popular culture and society and where as a species we are going. You could say we are at a point of true mass consciousness, what is felt somewhere in the global quickly permeates the entire sphere. That’s perhaps why for the longest time we’ve had a fetish-tistic relationship with the post apocalyptic in popular culture. Shows like The Walking Dead, even older flicks like Waterworld, Escape from New York or even present day contemporary ‘when the protagonist goes mad’ genre pieces like Breaking Bad:

– where order is blended and turned on it’s head. It’s like we’re too stressed to take real world action but instead live vicariously through this cathartic creative projection of an imagined reality where we would survive or go down in a blaze of glory if the system fell apart.

Therefore I like to combine certain themes and remix them through the lens of a perverse optimist:

because for a long time humanity was about cataloging the past, today we live in a culture that is so fast, we are constantly harassed to survive in the present and worried about the future…
that’s my theory of why nostalgia and the rise of how anything remotely seemingly put into the category of hipster culture came about, a rejection of blatant modernity but a remix of the old and new into fashion etc.

It’s like our sense of humanity is becoming one with the pulse of time itself and not existing alongside it. you hear of wacky vitals stories of people wanting to preserve their bodies to be re-awakened in a future where ‘advanced in science’ are better.

I feel it all stems from a very basic human need to cope with reality in a creative way.
You can either view all of these things way too seriously or humorously, I find that seeking the levity in things makes for a better time on earth.

What are the challenges you face as a contemporary artist?

Where do I begin? I think anyone who seeks out a contemporary art career is a perverse optimist, you have to be…everyday you strive to make the work you envision and circumstances around you or the world might tell you otherwise…at least at the start, even as things move along, you gotta get past all the hurdles to execute things to the fullness of your vision,

for example I’m working on a new series of carefully positioned food, never experimented with it before for artwork, so I decided to give it a go, the initial tries were hilarious but finally got some stuff executed to what I wanted, in the process I enlisted the help of a food stylist and we had to fry the chicken repeatedly and shoot it quickly before it turned to mush, I wanted to get the colour to be a particular hue of crispy…the theme is based on how we’re in the culture of documenting our meals, which have once been a private experience or at most shared amongst a few people, now dining can be a sort of performance art with digital devices as documentation and dissemination tools.

Experiment and have fun, don’t let obstacles or a believe in dogma ruin your creative spirit. I strongly believe whatever you do, go big or go home. Find what you need to do what you gotta do and persist with perverse optimism.

What would be your dream collaboration?
Quentin Tarantino. The Consciouness of Andy Warhol. Ridley Scott. Emily Ratajakowski. Hajime Sorayama.

Technology has been a huge driving force in the creation of your artworks, where do you envision yourself as an artist in the next 5 years? Do you have any big projects or shows in the coming year?

Future:
I have a couple of projects planned for 2015 and 2016. Positive busyness is good for the soul….

I’m leading an upcoming group show called “The Phygital World” at Chan Hampe Gallery, opening night is the 27th of Nov 7pm.
It’s a tongue in cheek show on the theme of how online and offline culture have become rather close knit… into a combined “Phygital Culture”… 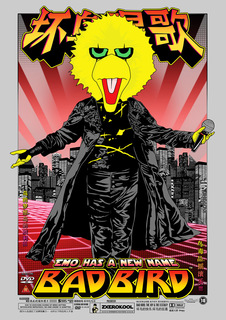 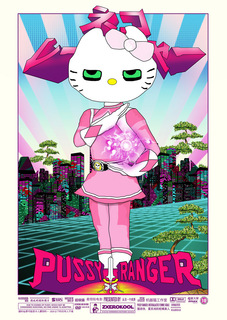 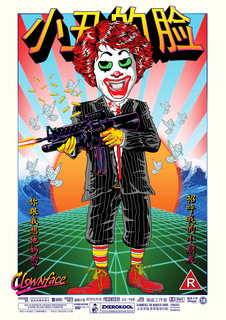